Greetings and salutations! Does anyone else love Heathers? The 1989 movie version, that is — with Winona Ryder? I love it and I’m definitely more of a Veronica than a Heather.

Anywhooooo — I thought I’d update you all on a few things about which you may or may not be interested!

A few weeks ago, I broke one toe on a Monday and a toe on the other foot on a Friday. One of the toes is healing nicely and the other one has decided it’ll stick around and make me walk like the Frankenstein monster. AND it’s wrapped up like a mummy. I’m absolutely certain the thing is cursed. 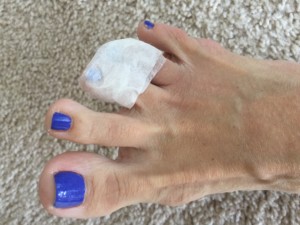 The 2019 Texts from Mittens calendar was released last week! Woooo! I’m super jazzed about it and have seen that many of you have already received yours. Last year it sold out before the holidays, so if you want one, get it while the gettin’ is good. Also, the pages for the 2020 calendar are due to my editor in September. That’s right, I’m from the future. 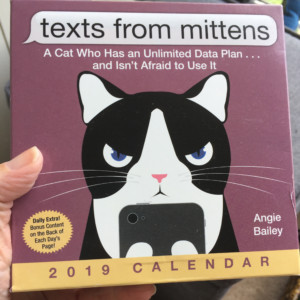 Per usual, I spent the 4th of July at my friend Katy’s house. She’s the lovely woman who plays Drunk Patty in the Texts from Mittens storyline. We had fun and no one was injured, although my head was nearly chopped off by Earl’s tail. That dog is a horse! Yes, Earl from Mittens lives with Katy and her family. Here’s a little pic from the day. Kari, the foxy lady on the far left is the mom of the cat who plays Stumpy, whose real name is Bombur. Confused yet? 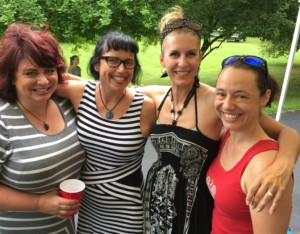 My Paws Rewind: Gen X + Cats podcast has eight episodes released and is being met with great reviews. Most people describe it as FUN, which makes me happy. Others say they wish they could join in the conversation because who doesn’t want to discuss the fine details of the Dukes of Hazzard and Xanadu? If you haven’t listened and are a fan of 70s and 80s nostalgia … and cats, I invite you to sample an episode. You can find them all here and they’re also available on the major podcast platforms.

This week’s show tells the story of THIS: 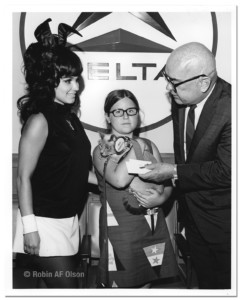 Speaking of podcasts, this week I launched a page on the Patreon site. What does this mean to you? It means you can become a patron of Paws Rewind for as little as $1 a month, which goes to the costs associated with producing the show and my time. As a creative freelancer, I have a habit of not always valuing my time and the work I put into projects. As my numbers grow, I’ll seek company sponsors, but this is your chance to get in on the ground level and say, “Hey, Angie! I like what you’re doing!” I’m not into hard sales, so that’s all I’ll say about that. If you’re interested — or at least want to watch the silly video I created, go HERE.

Thank you all for your ongoing love and concern of my boy. He’s doing pretty well. The steroids are doing their job of keeping the swelling down, but the growth is getting bigger and now I can see it barely coming through his cheek near his whiskers. He’s on pain meds and seems happy. He’s doing the big four:  eating, drinking, grooming, and litter-boxing. He’s also snuggling a little more than usual, which is totally fine with me. Phoebe is not being very nice to him and acting out a bit. I’m giving her extra attention because I think she knows something up with her big brother — plus, he’s getting a lot of extra attention from Chris and me. Siblings.

For the past weeks, I’ve been especially aware of my anxiety, impatience, and people-pleasing tendencies. I think they’re all related, and do my best to keep them in check. Thank goodness for human and cat therapists.

Until we meet again …